Known for offering outstanding, results-driven facials, Lisa Franklin’s treatments have been voted amongst the top in London. The addition of the ‘Air Treatment’ featuring OXYjet adds a highly effective, oxygen-based skin rejuvenation option to the menu at her recently opened flagship clinic. Lisa Franklin and her team of skin specialists are using the OXYjet Leo, a patented German-made system which delivers pure, concentrated oxygen and active ingredients painlessly into the deepest layers of the skin using a pressure pulsed action to achieve the signature ‘OXYjet glow’. The process encourages skin cell regeneration which reduces the appearance of lines, wrinkles and pigmentation irregularities resulting in a smoother, more uniform complexion overall.

‘Our new Air Treatment, featuring OXYjet technology, literally breathes life back into the skin. In combination with LED light, diamond peel heads, our unique polyrotation massage tool and pure, pulsed concentrated oxygen, this multi-layered treatment expertly and gently promotes skin regeneration. It removes skin cells and intensely cleanses the skin, allowing for our special active ingredients to be delivered efficiently into the deep layers of the skin. The targeting effects from the actives unfolds to optimal effect, without the use of needles. Suitable for sensitive skin, the result is deeply purified, cleansed and regenerated skin’  – Lisa Franklin

Stars Get Glowing for The Oscars® with OXYjet 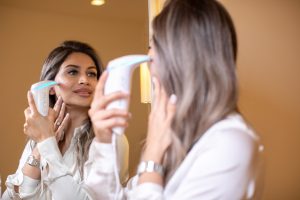 We can now reveal that in the run up to the Oscars® Adeela Crown opened her Hotel Bel-Air skin suite to five-time Oscar nominee, Sir Kenneth Branagh, currently working on a production of Death on the Nile due to be released later this year. American actress Annette Bening was also treated to Adeela’s signature treatment, Crowning Glowry™ with the OXYjet Go in preparation for the big night. No stranger to the Oscars®, Bening has four Academy Award nominations under her belt. Star Wars actress, Daisy Ridley was welcomed by the Super Facialist at Hotel Bel-Air, with her latest film, Star Wars: The Rise of the Skywalker being Oscar nominated for Best Original Score this year. Tyrese Gibson, whose latest film, F9, part of The Fast Saga is due for release in May also received an OXYjet Glow before he was documented attending the Vanity Fair Oscars Party. 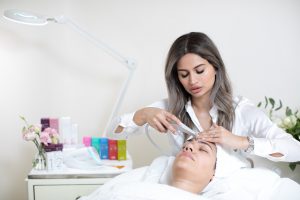 We are delighted to announce our 2020 partnership with Super Facialist, Adeela Crown.

Adeela is well known for her bespoke facial treatments and currently holds a residency on Park Lane at the luxurious spa set within iconic London hotel, The Dorchester. Her treatment menu features a number of specialist facials including her signature Crowning Glowry™, each of which is as individual as her high profile clients. Adeela draws on her knowledge and skills alongside the highest quality skincare and technology from around the globe to achieve the very best results.  Her love of skin tech and gadgets is well documented and the OXYjet Leo and hand-held, OXYjet Go fit perfectly with her ethos of creating a natural glow.

OXYjet in Los Angeles for the 2020 Oscars®

In very exciting news, OXYjet UK, are thrilled to announce that the OXYjet glow will be making an appearance in Hollywood in preparation for the 92nd Academy Awards. Super Facialist and OXYjet Brand Ambassador, Adeela Crown is in Los Angeles preparing clients for their walk down the red carpet in her invitation-only suite within the luxurious Hotel Bel-Air. Already extremely au fait with the OXYjet treatments, Adeela uses the machines during facial treatments at the spa within The Dorchester on Park Lane, Mayfair when in London. Both the OXYjet Leo, the multifunctional professional salon machine and the hand-held OXYjet GO are incorporated within her treatments as she works to achieve a glowing complexion for clients including a number of high profile names due to appear at the 2020 Oscars

KEEP UP TO DATE

Q. What results can I expect from using the OXYjet

A throwback shot to a training day at In Harmony S

Such great news for skincare professionals in Engl

Dermatest have confirmed the effectiveness that th

The patented pressure pulsed action used in both t

Q: Which serum should I use with the OXYjet Go at

The original OXYjet technology was developed in Ge

The OXYjet Go allows you the benefits of a the pat


Error: API requests are being delayed for this account. New posts will not be retrieved.

We use cookies to ensure that we give you the best experience on our website. If you continue to use this site we will assume that you are happy with it.Ok